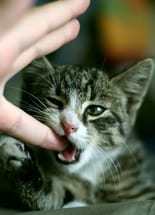 Adults and children can be bitten by a wide range of animals, most commonly dogs, cats, hamsters, raccoons and squirrels. These bites may be provoked or unprovoked. They can be of little consequence, or can be quite serious, or even life-threatening.

As might be expected, the most common animal bites are dog bites which account for approximately 80 percent of all cases. Cats are responsible for about 15 percent of biting incidents. The bites of other wild or domesticated animals and human bites result in the remaining 5 percent of bite injuries. The most frequent bites by wild animals depend on the area in which the individual resides. Some of the most common wild animal bites result from contacts with raccoons, squirrels, bats and snakes.

Bites can cause a variety of injuries, depending on the size of the creature doing the biting, the nature of the teeth inflicting the wound and the severity of the attack. Even an accidental contact with the teeth of another animal may cause an injury considered to be a bite. Injuries inflicted by biting include:

In some cases, bite injuries may be severe and cause deep tissue damage or damage to nerves, tendons or joints.

Since the teeth can be a source of bacteria, it is important to wash any resulting cut or open wound thoroughly by running it under warm water for 10 minutes. The wound should be encouraged to bleed, unless it is already freely bleeding. Painkillers may be administered to relieve pain and inflammation.

All but the most superficial bite wounds should be seen by a physician. More serious wounds may require stitches, tetanus shots, or even treatment for rabies. Antibiotic ointment or oral medication may also be prescribed. Bite wounds must be kept clean and usually be bandaged to promote healing. Bites of poisonous snakes require administration of special antitoxins.

Bites may result in a variety of medical problems. Bacterial infection is the most common complication and is usually evidenced by redness, swelling, pain or pus at the site, or fever and other symptoms of systemic infection. While any animal bite may result in a bacterial infection, there are certain risks particular to bites by specific creatures. A bite or scratch by a cat, because of the nature of a cat's teeth, more frequently results in a puncture wound. A bite or scratch by a cat may also result in cat scratch fever which has severe flu-like symptoms and may result in serious complications. With certain animals, such as bats, raccoons, and occasionally dogs, the possibility of rabies must be considered, especially if the animal in question seems ill or acts peculiarly during the encounter. Bites which entail the possibility of rabies, deep wounds, or serious enough infections to require intravenous antibiotics, may necessitate hospitalization or surgery.

In order to avoid animal bites some simple precautions may be taken. All animals, even family pets, should not be disturbed while they are eating. Aggressive play with animals should be avoided, and young children should always be carefully supervised when they play with pets. Children should also be taught never to pet or handle animals they do not know, not to corner animals or invade their private territories, and to back away from animals that seem angry or threatened or are protecting their young.

To avoid animal bites, it is also necessary to vaccinate all domesticated animals that may become rabid, including cats, dogs and ferrets, against the disease, and to make sure all family members are up to date on their tetanus boosters.